On Thursday, May 15th, NPR and WBEZ held a very special live taping of Wait Wait… Don’t Tell Me! at the Warner Theatre in Washington, DC. The live taping marks Carl Kasell’s final show as the the official judge and scorekeeper of Wait Wait. With huge thanks to Ian Chillag and the Wait Wait team, they had set aside two tickets to the show for me.

Originally, a friend of mine that works for a certain automaker with US headquarters around Herndon, VA with a logo that contains a set of four rings, was going to go with me. Unfortunately, work beckoned and he was not able to attend. So, I put the call out to DC Tens fans (for those that don’t know: Tens are fans of a certain podcast called “Too Beautiful To Live”, hosted by a certain Wait Wait guest host and fairly regular panelist: Luke Burbank) and one of the fans called dibs on the ticket.

With that set, I then planned my visit to Washington, DC to coincide with the Wait Wait taping. I landed in DC on Tuesday afternoon and used Wednesday as the day to do the “touristy” thing, including visiting the National Mall and visiting most of the Smithsonian museums surrounding the Mall. After coming back from the Mall, I stopped by the Warner Theatre to pick up the two tickets at Will Call and saw that they were for the Pit section, row BB. Not knowing the venue very well, I thought that the seats would be around halfway back in the lower level.

So, after scouring the Interwebs for seating charts, my jaw dropped to the floor and my heart started to race: it was two rows back from the stage! 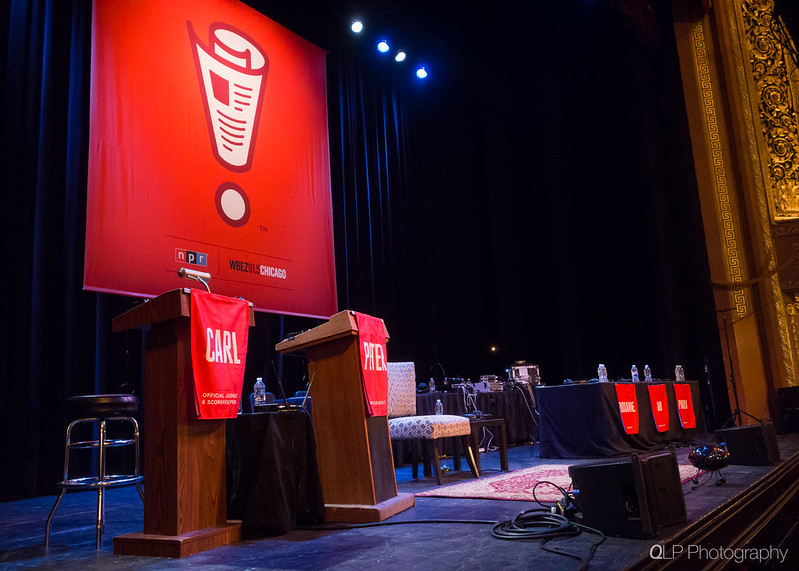 On my way back from venturing out to Herndon, I stopped by the bar where DC Tens fans were meeting up before the show to give her the ticket I had. After running back to the hotel to drop off my heavy laptop and camera bag, I sprinted back over to the Warner Theatre just before the doors opened. Just outside of the front doors, I met Melody Kramer, former Wait Wait director, and said hi. I think that was enough to make her day :)

Between then and the show started, I got to say hello and thank you to Ian, as well as chatting with Don Hall, Brian Babylon, and Tom Bodett. As the show started, I immediately forgot that I didn’t bring anything to jot down notes of the show for the Stats Page. Thankfully, the DC Tens fan had a pen and a scrap piece of paper with her and let me use them.

The moment that Carl Kasell’s name was announced and as he walked on to the stage, he was greeted with a standing ovation by everyone. It wouldn’t be the first and only time, but it was just as emotional each time it happened. 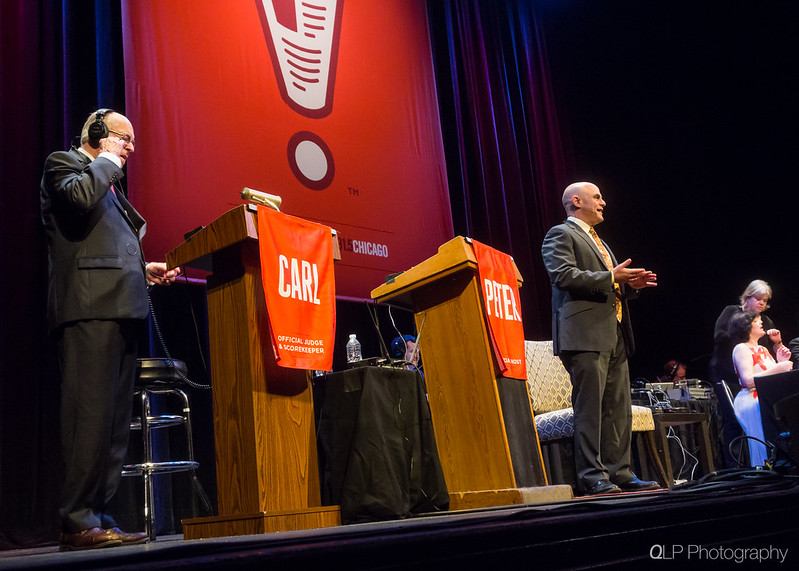 The panelists for the show were Roxanne Roberts, Mo Rocca and Paula Poundstone; and, the Not My Job guest was White House Chief of Staff for President Bill Clinton and current advisor to President Barack Obama. 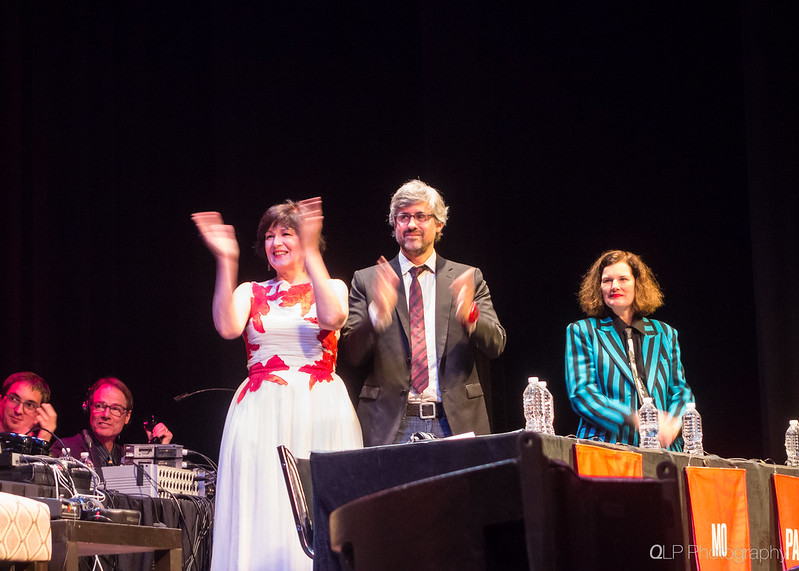 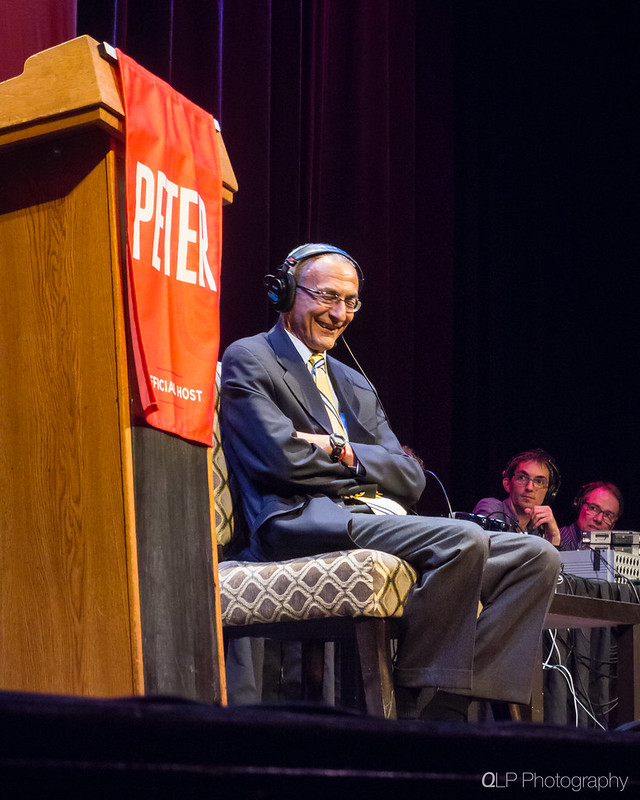 During the show, they played four special messages recorded for Carl Kasell by Stephen Colbert, Tom Hanks, Katie Couric and President Obama. There were a lot of moments from the live taping of the show that did not make it to air, including quite a few moans and groans from the audience due to Mo Rocca’s jokes and puns. In a way, it could have easily been an all-MOan show, but the star of the show was Carl Kasell. During the Listener Limerick Challenge round, the audience quietly spoke the answer to each of the limericks, more so with the first and third. It was enough for Peter Sagal signal the audience to keep it a bit quiet, in case the listener could hear it.

Mo Rocca did try to signal that Paula did answer seven questions correctly, but no correction was made. After the show, I did get to meet Mo Rocca and showed him the notes. With that said, if the scores were noted correctly, Mo Rocca would have ended up coming in at third place and Roxanne in second. I had also brought it up to Ian Chillag to the after show party that I was invited to. In the edited version of the show, the special message recorded by President Obama took place of the usual panelist predictions. Normally, Peter Sagal would close out the show by saying, “This is NPR,” but he gave that honor to Carl Kasell.

Usually, after a live taping of a show, Peter Sagal would open up a Q&A session with the audience. In this case, Peter chose a few people in the audience to provide them a chance to thank Carl Kasell and give their Carl or Wait Wait story. Mo, Roxanne, Peter and Carl were also available to sign things for the audience member. As noted earlier, I did get Carl and Peter to sign my tote bag.

At the after show party, I got to finally meet and chat with Paula Poundstone for the first time (I had been to one of Paula Poundstone’s comedy shows and seen her on stage at the NYU Skirball Wait Wait cinecast event, but didn’t get to say hello to her at either). I also got to chat with Emily Ecton and, the notable absent at the taping, Luke Burbank and his wife, Carey.

Roxanne Roberts wrote an article for The Washington Post that provides a great look back at the show and Carl Kasell’s impact on the show and to others that have worked with the public radio legend.

I had an excellent time at the show’s taping and am humbled in Carl Kasell’s presence and with everything that he has done. Even though I have not had the honor to listen to the show from its very beginning, but have enjoyed listening to Carl Kasell’s voice and impressions for a decade. The show has been a huge part of my weekend and my love for the show led to the creation of my Wait Wait Stats Page.

Thank you for everything, Carl Kasell. Also, I want to thank the whole Wait Wait… Don’t Tell Me! crew for everything, be it tickets to the show and for producing such a great program.