In the past three years, I have had the opportunity to go to three live tapings of Wait Wait… Don’t Tell Me!, one in Seattle and two in Portland, my fair city. Since, I can never go to too many Wait Wait live tapings, I knew I had to head back up to Seattle when they announced that they were coming back to do two shows. As I was trying to find a way to make sure that I could queue up to purchase tickets the moment they went on sale to the general public, the awesome gang at Wait Wait said that they would hook me up with tickets to both shows. To say that I was ecstatic would be a significant understatement. At that point, I immediately booked my hotel room and submitted my request for time off from work and started the two month wait.

Fast forward to this past week, I made the trek up to Seattle, made a quick stop to drop my stuff off at the hotel and moseyed my way down to the Moore Theatre. After picking up my tickets, I anxiously waited for the doors to open down to the main floor. While waiting, I pulled out my not-so-little steno and started prepping it to take notes during the taping. At that time, I only knew that Luke Burbank would be on the panel and that Greta Gerwig would be the Not My Job guest. Once the doors opened, I made my way down to my seat, which was a pretty darn good aisle seat in the center section and found out that Negin Farsad and Hari Kondabolu would be two other panelists. 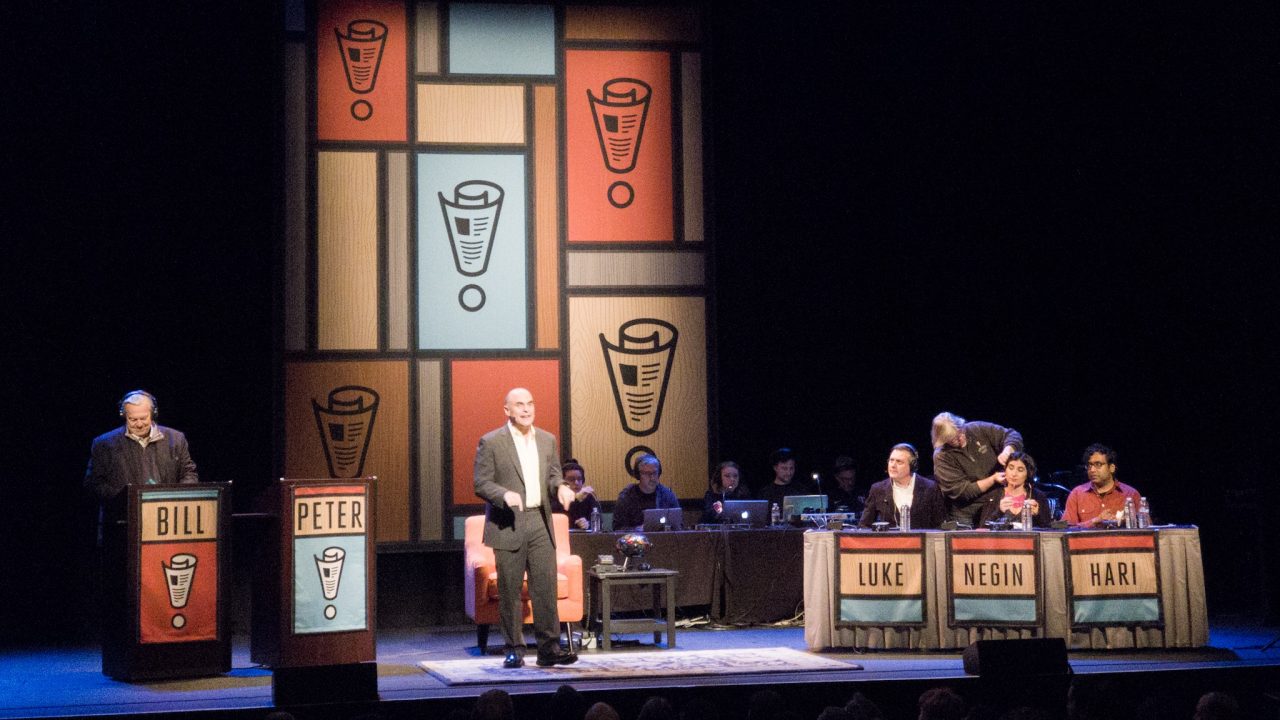 Back in August 12, 2006 when Luke filled in for Peter Sagal for three shows, the tradition of the audience chanting “Luuuuuuke!” started when he is introduced or mentioned during the taping. The tradition continues today, though varies depending on the size of the crowd and the location of the taping. Since this show was taped in Luke’s home turf of Seattle, it was quite pronounced. Of course, there are always a portion of the audience that think people are booing Luke rather than chanting his name.

Overall, the show had a lot of funny moments created by the various jokes that Peter and/or the panelists make regarding the questions that were asked to the listener contestants and to the Not My Job guest. For the Lightning Fill-in-the-Blank round, Hari ended up getting the short straw when it came to the starting order; as, the questions that he was asked were some of the more tough questions out of the pool asked. Hari was only able to correctly answer one of the eight questions. More on this later on.

Ever since Wait Wait… Don’t Tell Me! started back in 1998, even when Peter Sagal was a panelist on the show and not the host, the panel consisted of three panelists. There would always be at minimum one female panelist on the panel, sometimes two. It wasn’t until the Wait Wait that aired in September 12, 2015 did the show have an all female panel consisting of Faith Salie, Roxanne Roberts and Paula Poundstone.

Roughly one year and nine months later, on the June 10, 2017 show, Wait Wait would have their second all female panel, featuring Paula Poundstone, Faith Salie and Tracy Clayton.

After the show aired and I finished collecting notes, I started to what the panel looked like in terms of how many male and female panelists were on each show’s panel. So, I started figuring out what database queries I would need to write, validate the results and collected the data onto a spreadsheet (to the TBTL listeners out there, the last “t” is silent).

Paula Poundstone was one of the guests on the Friday night edition of The Late Show with Stephen Colbert. Stephen Colbert has been on Wait Wait… Don’t Tell Me! as a guest twice and is a very regular listener to the show, he brought up the topic of Wait Wait with Paula. The Wait Wait talk starts at the 3:29 mark in the video below:

Paula said that she didn’t know how many times she has been on the show and Colbert said that his research department noted that she has been on 201 times. Paula then mentioned that I keep stats on everything Wait Wait. She also states that she holds the record for losses on Wait Wait… Don’t Tell Me.

Looking at the panelist stats, for the show data that I have recorded, Paula does hold the honor of coming in third place the most number of times, 87. That said, of the regular panelists on Wait Wait, P.J. O’Rourke holds the honor of having the highest percentage of appearances in which he came in third, at 46.43% of the time versus Paula’s 43.28% of the time.

So, there is a little bit of a silver lining for Paula Poundstone’s record on Wait Wait… Don’t Tell Me!

During the Lightning Fill-in-the-Blank segment on the show that aired on April 29, 2017, Amy Dickinson commented that that show was lowest scoring show ever. At the start of the segment, Roy Blount Jr. had two points, Amy Dickinson had one, and Tom Bodett had four. When Amy made the comment, both Amy and Roy had correctly answered four questions each for a combined score of 19. Tom Bodett blitzed through his questions and had answered six correct; thus, bringing the grand total to 35 points.

I was curious to see what is the lowest scoring show in Wait Waist… Don’t Tell Me! history; well, shows that included a Lightning Fill-in-the-Blank type round anyway. So, I started querying the database to weed out shows that I do not have panelist scores for, as well as Best Of and repeated shows.

Based on the result of the above query, the show that actually has the lowest score was the one that aired back in November 23, 2002, which had a combined score of 21 points.

The November 23, 2002 show is made famous by the fact that it was the first time a panelist did not answer a single Lightning Fill-in-the-Blank question correctly. That (dubious) honor went to Paula Poundstone; who, repeated that same feat on the show that aired on March 29, 2008.

The March 29, 2008 show is one of the six shows that are tied for second lowest scoring show, with a combined score of 25 points.

In summary, even if the April 29, 2017 show finished without Tom Bodett answering any of his questions correctly, the combined score of 23 would end up being the second lowest scoring show; but, it would not be the lowest scoring show.